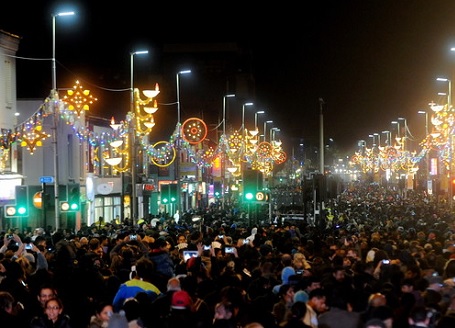 Lucy Zodion helps to light up Diwali celebrations in Leicester

The council wanted to upgrade the existing system of ABS plastic boxes mounted onto columns as there had been issues with water ingress that caused the lighting circuits to trip. As there was currently only one RCD protected circuit being used, any fault would have caused all of the Diwali lighting to fail. A more robust system was required that could be left mounted to the columns all year round and that also had a localised protection so that if a fault occurred only a local display would trip.

Leicester City Council had been working closely with Balfour Beatty to achieve this and Lucy Zodion was approached to provide this solution recognising their excellence in this field.

After discussing the brief and possibilities with Leicester City Council it was decided to use a tried and tested formula currently used within the Lucy Zodion ‘Westminster” Range. This consists of an IP67, UV resistant enclosure fitted with 16A and 32A 3 pin plugs and sockets with twist-lock caps to maintain the IP67 rating.

On this installation Leicester City Council had a five-column lighting display system with the central column being the power supply point. This column contained four individual supplies that were used to supply all the festive lighting displays either side of this. In total there were eight x five column systems, all fitted with the same equipment.

The design used two distribution enclosures on the central column. Box would feed three lighting circuits (RCD protected) on three pin sockets but also the capability of supplying another two distribution enclosures further down the line. This was achieved by using a 32A 3 pin plug and socket arrangement. Box used the same principles and techniques.

Boxes Left and C right included the capability of accepting the 32A supplies from boxes A and B but also able to power 3 lighting displays. These were handed to prevent crossover of supply cables. Box was an end-node that contained two lighting supplies.

All the connections are quick release with no need for further wiring required once in situ. They are mounted onto 304 grade stainless steel brackets ideal for harsh weather conditions and city environments and fixed to the column with stainless steel strap band.

To localise any potential earth leakage issues within the system a combination of 30mA, 100mA and 300mA RCDs were used. Any faults could be isolated locally so allowing for the rest of the display to be illuminated in a fault condition. All circuits were labelled using the customer referencing and made from 3mm black on white Traffolyte material.

The timescale of this project was seven weeks from the initial concept discussions, concept drawings, amendments, drawing approvals and manufacturing.

After discussions with the Council we soon realised that a bespoke solution would be required for this project. One of Lucy Zodion’s great strengths is that as a business we can look at individual projects of this nature as we have in-house design, manufacturing and testing capabilities that can cover almost any scenario

Through the removal of the existing boxes, the upgrading of the existing wiring and connections and the quick installation of the new boxes we were able to save money not only in terms of labour costs but we were also able to cut the costs of traffic management. A further benefit has been that since the new equipment has been installed there has been a noticeable drop in outages and repairs

We had worked with Lucy Zodion on a previous project and so knew of their reputation for excellence and their expertise in creating bespoke lighting solutions. The Installation has gone very smoothly and I would like to thank Tracey, Ian and Garry for their work and help on this project

While street lighting provides a fundamental and functional role in illuminating our streets, roads and highways, it can also be instrumental in ensuring cities are appealing and…
Find out more